It’s fitting that the topic is marriage since our 22nd anniversary is next month. 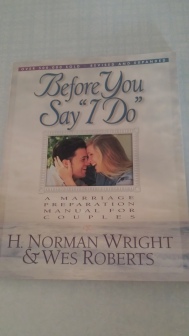 1. “Before You Say ‘I Do’: A marriage preparation manual for couples” by H. Norman Wright & Wes Roberts

Like going through an in – depth, practical boot camp to get ready for marriage. Perfect for those personalities who want to read the entire instruction manual prior to putting all the pieces together. Not so perfect for those who like to jump into a project and don’t mind “a few parts left over” later.

I noticed that there’s an updated version. The one I own was published in January 1997 (which means we were already married for four years when we got this)! The new one came out in August of 2015, a couple of months ago.